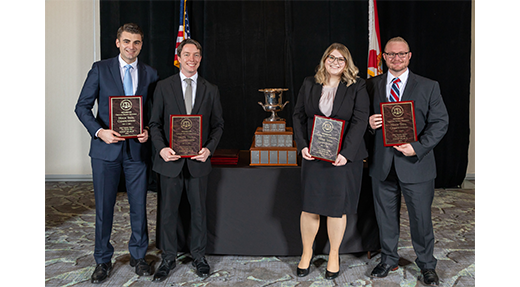 Watch their championship round here. 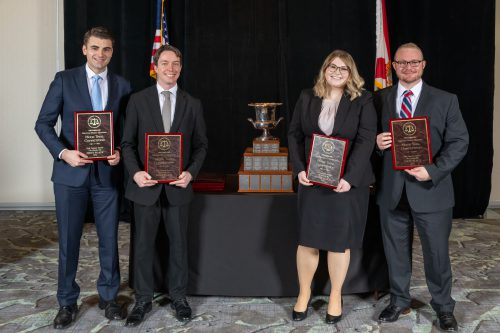 Trying the wrongful death case Billie Eyewish, on behalf of herself and as Personal Representative of the Estate of Casey Busgraves v. Mega Entertainment, Inc., FIU went undefeated in all five rounds, winning every judge’s ballot through the preliminaries and all but two the rest of the way, including a decisive 4-1 win in the final.

This is FIU’s second Bedell championship. Its first Bedell title was in 2016.

The trophy now comes back to Miami, where it will remain on display outside the small courtroom until the tournament next year. 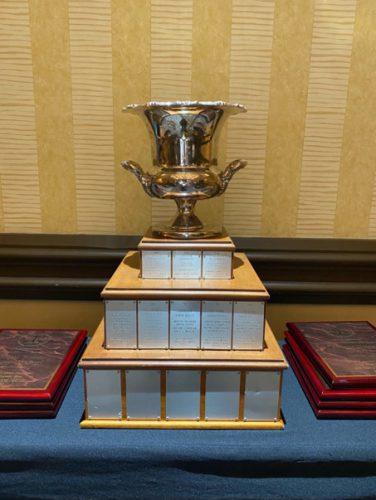 The Bedell Memorial Trophy, entrusted to the winning school to display for the year.

The Trial Team began practicing together on December 16th, just two days after the conclusion of fall semester exams, worked every day except Christmas Eve, Christmas, New Year’s Eve, and New Year’s Day, and were among the only ones on campus for weeks, as 2021 closed and 2022 began.  The team then continued its work into the spring term, using every bit of evening time after class, the MLK holiday weekend, and the days thereafter to finalize its prep.

“Our Trial Team — these students – reflect the very best that is FIU Law,” said Professor H. Scott Fingerhut, Assistant Director of the Trial Advocacy Program and the team’s head coach.  “Our students really do defy gravity, and fly — determined to live lives of purpose and consequence, by day’s end, to do more good than harm.  They cannot be outworked, and they work selflessly together, striving to become the next generation of great trial lawyers.  They are the Passionate Principled Advocates of tomorrow – and the magnificent embodiment of our special FIU Law brand.”

Along with Professor Fingerhut, the Bedell teams were coached by College of Law and Trial Team alumni Justin James Duran (COL ’18), himself a former tournament champion and team captain, Chandler A. Lefevere (COL ’21), and Trial Advocacy Adjunct Professor Ari S. Goldberg (COL ’12), a former team captain as well, and Professor H.T. Smith, the inaugural Director of the Trial Advocacy Program.