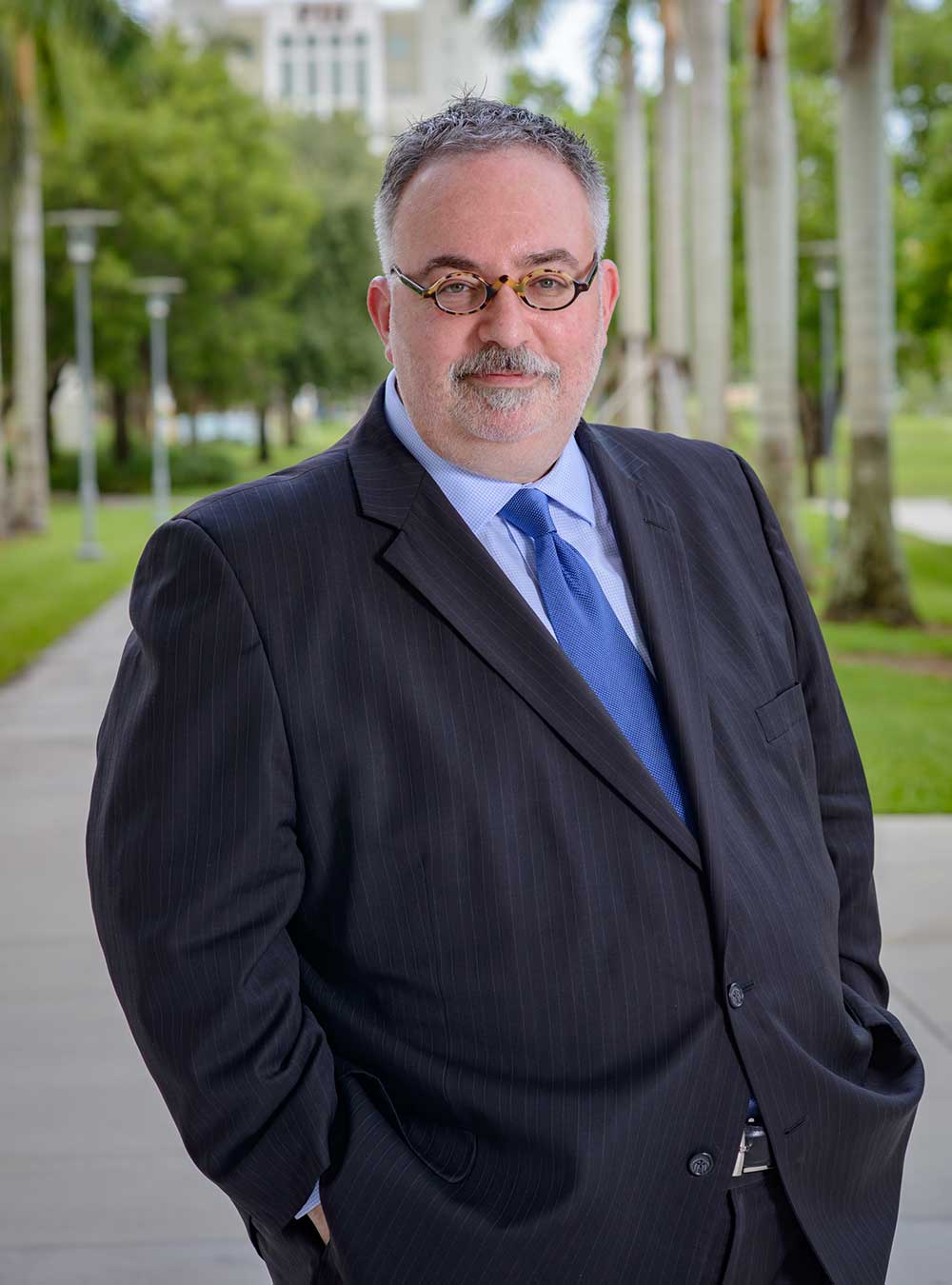 BiographyFaculty Selected ScholarshipNews Items
Scott Fingherhut is a three-time Professor of the Year who comes to FIU with more than 20 years of law teaching experience and nearly 30 years as an AV-Preeminent rated trial lawyer devoting his practice to criminal defense and the defense of applicants seeking admission before the Florida Board of Bar Examiners and lawyers facing discipline by The Florida Bar.

As a law teacher, Professor Fingerhut has served for over a decade as Assistant Director of FIU’s Trial Advocacy Program. He began teaching Trial Ad in 1995 in the Litigation Skills Program at the University of Miami School of Law, a position he held for 10 years. In 2000, he accepted an appointment in FIU’s School of Policy and Management, teaching Criminal Constitutional Law and Procedure, Criminal Law Theory, Law and Social Control, and Judicial Process and Policy in the undergraduate and Master’s Degree criminal justice programs. In 2005, he came over to the College of Law.

Beyond campus and court, Professor Fingerhut recently completed his second term as Chair of the Florida Bar Criminal Procedure Rules Committee and serves as well on the Bar’s Committee on Student Education & Admission to the Bar. He was recently re-appointed to a Professionalism Panel for the Eleventh Judicial Circuit Committee on Professionalism.

Professor Fingerhut has served as Chair of The Florida Bar Criminal Law Section and Chair of the section’s Certified Legal Education Committee, President of the Miami Chapter of the Florida Association of Criminal Defense Lawyers (FACDL-Miami), Chair of the Dade County Bar Association Criminal Law Committee, and Dade County Bar Designee to the Miami-Dade County Mayor’s Mental Health Task Force. He has also served on the Board of Directors of Legal Services of Greater Miami, the South Florida Mental Health Association, Court Care, and Friends of the Miami-Dade Drug Court, and on the Dade County Courthouse Courtroom 6-1 Restoration Project Committee. He was a member of the Bar’s Committee to Study the Decline in Jury Trials, the Florida Supreme Court Criminal Court Steering Committee Workgroup on Post-Conviction Relief, the Editorial Board of The Florida Bar Journal and Florida Bar News, and, by appointment of the Chief Justice of the Florida Supreme Court, the Florida Innocence Commission.

A frequent lecturer and writer on liberty and justice matters, Professor Fingerhut co-authored Robert S. Reiff’s Drunk Driving and Related Vehicular Offenses for Lexis Law Publishing. His co-authored chapter, “Conflicts of Interest and Other Pitfalls for the Expert Witness,” was re-published in the revised edition of Springer Publishing’s Handbook of Forensic Neuropsychology. And released last year from LexisNexis is his co-authored Florida DUI Law Practice Guide.

Professor Fingerhut received his undergraduate degree in American Government and Music from the University of Virginia in Charlottesville, and his law degree from Emory University in Atlanta. Before entering private practice, he proudly served as a prosecutor in Janet Reno’s Miami-Dade County State Attorney’s Office.

Professor Fingerhut is the recipient of the “Put Something Back” Pro Bono Award from the Dade County Bar, the Daniel S. Pearson-Harry W. Prebish Founders Award from FACDL-Miami, and the Steven M. Goldstein Criminal Justice Award from FACDL Statewide. In addition to Professor of the Year, he has twice received the FIU Law Pioneer Award and six times he has been selected by the law school graduating class to hood them at Commencement.

Courses: Professor Fingerhut teaches Trial Advocacy, Criminal and Civil Pretrial Practice, and Criminal Procedure. He has also taught Criminal Law, as well as the course component to the Criminal and Civil Law Externship. By Dean’s appointment, Professor Fingerhut is fortunate to serve as well as a Faculty Fellow in The Honors College at FIU, where he teaches a year-long undergraduate seminar, Observing Ourselves: A Primer for Life After Honors, while also serving as Director of the Honors College Pre-Law Programs.
​