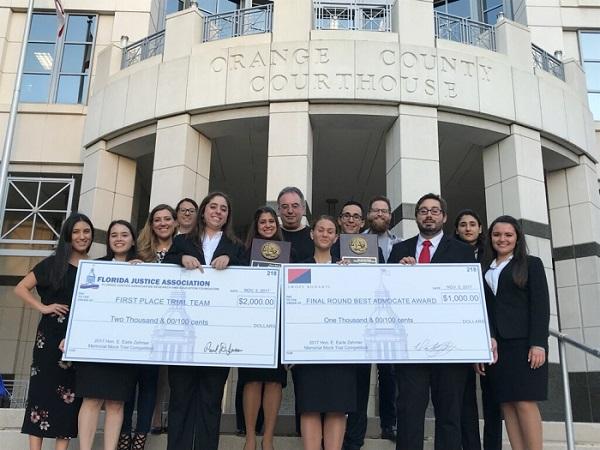 Held this past weekend at the Orange County Courthouse in Orlando, and sponsored by the Florida Justice Association, this year’s Zehmer competition once again featured Florida’s traditionally talent-rich trial advocacy programs, making ours among the toughest mock trial regions in the nation.

Our champion team – JUSTIN DURAN (our swing advocate), JOSEFINE BLICK (advocate for the plaintiff), COURTNEY SALAS (advocate for the defense), and RAFAEL TORRES and ANNASOFIA ROIG (each playing critical dual witness roles) – went undefeated all weekend long, beating St. Thomas and FSU in the preliminary rounds, FSU’s second squad in the semi-final round, and conquering national powerhouse Stetson in the championship round – and in each round by wide margins at that.

Our champion team was awarded a $2,000 prize for their accomplishment.

In addition, COURTNEY SALAS was selected BEST ADVOCATE in the finals, earning her a $1,000 prize.

These nine (9) students devoted almost two (2) months of their law school lives to this endeavor – practicing with their coaches weeknights and weekends, and working together, as colleagues and teammates, on their own time, and, of course, working by themselves, throughout September and October, to put themselves in the best position possible: not merely to win the competition, but to represent their clients and their causes to their fullest potential.

“These students are our astronauts, our gladiators,” said Professor H. Scott Fingerhut, Assistant Director of the Trial Advocacy Program.  “To watch them soar, to thunder away bravely in the arena, reaffirms two things: everything great about who our students are — as people and as young lawyers-to-be – and everything great about who we are and what we do here at FIU.  For as, if not more, impressive than all of the winning our Trial Teams have been doing of late, is the blood, sweat, and tears our magnificent students shed, in the hours and hours of preparation they put in, from early in the morning til deep into the night, in their genuine desire to become the next generation of great trial lawyers.”

As in 2016, the Zehmer team was coached by Professor Fingerhut, along with veteran Trial Team coach, Class of 2009 FIU Law alumnus, former Trial Team member, and current Adjunct Professor teaching Trial Advocacy, ARI GOLDBERG, of Meltzer and Bell, P.A., in West Palm Beach, and three (3) new Trial Team coaches – all FIU College of Law Alumnae and all Miami-Dade Assistant Public Defenders — AUDREY-JADE SALBO (Class of 2015), CASSANDRA MILNES (Class of 2015), and ELSA FERNANDEZ (Class of 2009 and a Trial Team member herself).  The Zehmer team was also assisted by Class of 2017 College of Law alumnus ELROY JOHN – a two-time Trial Team Champion and Best Advocate award winner himself – of Fischer Redavid Trial Lawyers in Miami.

The Trial Advocacy Program is led by Founding Director Professor H.T. Smith and offers a wide range of advocacy courses and opportunities in and out of the courtroom to prepare our student Trial Lawyers-in-Residence with passion and principle, so that they be practice-ready upon graduation.