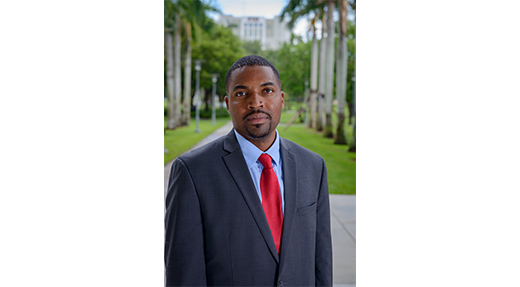 Professor Charles C. Jalloh, Professor of Law at FIU College of Law and member of the United Nations International Law Commission, was last week elected to the Board of Editors of the American Journal of International Law (The AJIL) for four years effective April 2022. The AJIL is one of the pre-eminent referred international law journals in the world. Nomination and election to its editorial board is considered a significant recognition of esteem for scholars in the field of international law.

The AJIL is the flagship publication of the American Society of International Law (ASIL), a nonprofit and nonpartisan organization, based in Washington, DC, whose mission is to promote the study of international law and the establishment of peaceful relations on the basis of law and justice. ASIL was founded in 1906 and chartered by Congress in 1950. It has published the AJIL quarterly, now in collaboration with Cambridge University Press, since 1907.

ASIL is also widely known for its popular annual meeting of international lawyers. Professor Jalloh was an invited panelist and presented a paper on the proposed crime of ecocide for the panel Climate Change at the Interface of Social Movements & International Law on April 7, 2022. He had served on the independent global expert panel that produced the definition.