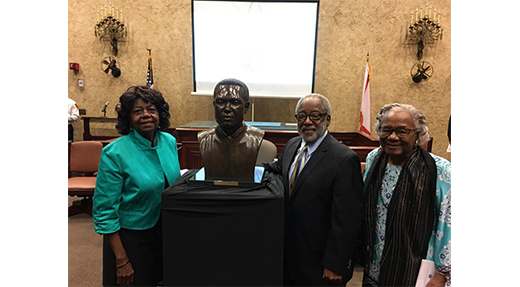 At the 2020 Inaugural Eleventh Judicial Circuit Black History Month Program, Professor H.T. Smith, founding director of the FIU College of Law Trial Advocacy Program, honored the life and career of pioneer judge and civil rights activist Judge John David Johnson, and commemorated Judge Johnson’s legacy with the unveiling of a bronze bust to be displayed at the Black Police Precinct and Courthouse Museum (commonly called the “Colored Court”) in Miami.

The bust was commissioned by the law firm of Hunton Andrews Kurth, and the event, held in the Ceremonial Courtroom at the Dade County Courthouse, was sponsored by the 11th Judicial Circuit and the Wilkie D. Ferguson, Jr. Bar Association – of which Professor Smith is its founding president. 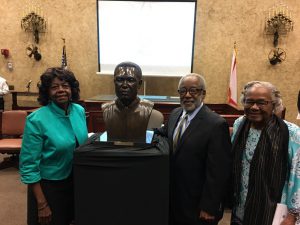 Pictured (from left to right) alongside the commemorative bust of Judge Johnson are Dorothy Fields, founder of the Black Archives, History & Research Foundation of South Florida, and Judge Johnson’s niece, Professor H.T. Smith, and Thelma Gibson, community leader and founding sponsor and namesake of the Thelma Gibson Health Initiative

Before a standing-room-only crowd, Professor Smith – who led the movement to create the bust of Judge Johnson — spoke of the judge’s remarkable journey, earning his law degree from Howard University, after which he joined notables like Thurgood Marshall, G.E. Graves, and Frank Reeves to win cases leading to racial integration in places like Orange Bowl Stadium and city-owned Miami Springs Golf Club, as well as developing and establishing programs to benefit the poor, like Miami-Dade’s Food Stamp Program, The Family Health Clinic, and the Model Cities Legal Services Program, ultimately being appointed the City of Miami’s second black municipal judge since Reconstruction, and the fourth black judge in Florida.

Judge Johnson presided over 50,000 cases during his term on the bench.  But he did not – or rather, was not permitted to — hear cases at the whites-only courthouse.  Judge Johnson heard his cases at the blacks-only police station in Overtown.  And he was not allowed to wear a judge’s robe, either.  Judge Johnson dressed in a suit.

“The unveiling of the bust of the late great Judge John D. Johnson at a celebration hosted by judges of Miami-Dade County is a significant recognition of the contributions that he made in opening the vaults of opportunity for many African-American judges who have followed in his trailblazing footsteps,” Professor Smith said.  “Judge Johnson will forever be a source of pride to future generations,” Professor Smith continued, “and a role model for those seeking to demonstrate a consistent commitment to excellence.  Judge Johnson’s legacy is now cemented in perpetuity.” 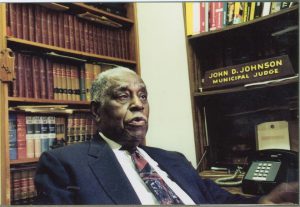 Retired Judge John D. Johnson, at 95, then the older living black attorney in the state of Florida.

Judge Johnson passed away in 2001 at the age of 98. His statue is on exhibit in Overtown at the Black Police Precinct & Courthouse Museum, located at 480 N.W. 11th Street.

Professor Smith teaches Trial Advocacy and Advanced Trial Advocacy.  He also serves as chairman of the board of the Gwen Cherry Park Foundation.

Professor Smith may be reached by email at htsmith@fiu.edu or by calling the Trial Advocacy Program at 305-348-8095.