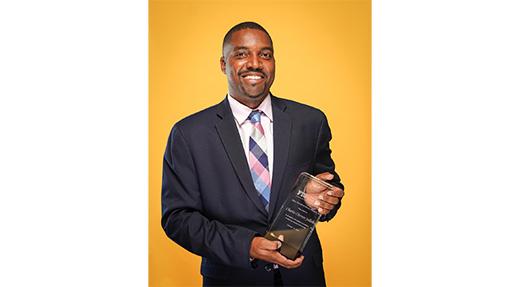 Professor of law Charles C. Jalloh and associate professor of nurse anesthesia Jorge Valdes have been named the winners of the 2021 Real Triumphs Faculty Award (RTFA). The President’s Council will award each professor $15,000 in recognition of their research excellence, collaboration, student teaching and leadership.

“Professors Jalloh and Valdes exemplify what it means to be outstanding faculty at our FIU. They both exhibit leadership and advocacy in their fields, are producing cutting edge scholarship and, most importantly, are exceptional teachers and mentors to the next generation of leaders in their professions,” said FIU Provost and Executive Vice President Kenneth G. Furton. “It is my great privilege to be their colleague and to be able to publicly recognize them at this week’s faculty convocation events.”

“Being a Real Triumphs Faculty Award winner is a huge honor considering that only a small number of faculty at FIU can count themselves as recipients. To receive it at this stage of my career is incredible for me,” said Jalloh, who serves on the U.N. International Law Commission – the pre-eminent legal expert body which has since 1947 played a critical role in the development of international law – the body of law and rules that govern and shape the relations between states.

The other winner of the RFTA — also a young faculty member — is Jorge Valdes, a passionate educator and mentor for students learning to become certified registered nurse anesthetists.

Two professors were awarded this year based on a decision to postpone the 2020 award due to COVID-19. Teachers of all academic disciplines were welcome to apply.

Here are some of the real triumphs that made the faculty members stand out.

Jalloh has earned a reputation at the university as a conductor of excellent research, a leader in the FIU and legal community and a mentor to Panthers. A native of Sierra Leone, he currently holds one of the seats representing Africa on the U.N. International Law Commission (ILC), a globally elected body of 34 eminent legal scholars to study some of the most pressing legal issues facing states and the international community as a whole. The jurists work as independent experts and seek to find the weak areas of the law that need to be strengthened. They work to build consensus and to codify the rules that they then recommend to states as way of addressing some of the world’s most serious issues.

Topics he has worked on range from how best to hold people to account for crimes against humanity, to environmental concerns such as sea-level rise, to identifying the rules of customary international law and the immunity of state officials from the jurisdiction of foreign courts.

“Both my research and the practical work that I do for the UN each summer brings home the idea of the ‘I’ in FIU,” Jalloh says. “I get to be at the table with the leading international lawyers of our time. We work on texts that aim to assist states in coming up with common rules that, if taken forward, enable them to function in a more peaceful way instead of going to war with each other. The work is based on the fundamental belief that states, and for that matter all of humanity, have more to gain from each other through cooperation and collaboration than division and competition.”

Jalloh teaches international law to students both inside and outside the classroom. He has developed a fellowship program with support from the FIU Law dean to bring students to the headquarters of the ILC in Geneva, Switzerland. There, students spend time working with top lawyers from all over the globe and observe first-hand the rigorous technical work that the ILC’s drafting committees are famous for.

“For students who want to get into international law, there could not be a better opportunity,” Jalloh said.

Jalloh has practiced law at the domestic and international levels, having worked on genocide and crimes against humanity cases at the U.N. Tribunal for Rwanda.

His latest book, The Legal Legacy of the Special Court for Sierra Leone (Cambridge, 2020), documents the impact of that international tribunal for the field of international criminal law which first took shape with the trial of Nazis at Nuremberg in 1946. The Sierra Leone tribunal was the first ‘hybrid court’ to be created by the U.N. and one of its member states to try those who committed atrocities in that country’s 1990s ‘blood diamonds’ driven conflict. It is widely seen as a model accountability mechanism for other countries.