Book Symposium: The Legal Legacy of the Special Court for Sierra Leone, by Charles Jalloh 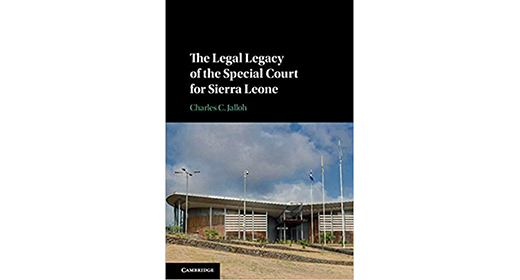 An upcoming book symposium discussing Professor Charles Jalloh’s monograph, The Legal Legacy of the Special Court for Sierra Leone (Cambridge, 2020) will be featured this and next week.

This important book considers whether the Special Court for Sierra Leone (SCSL), which was established jointly through an unprecedented bilateral treaty between the United Nations (UN) and Sierra Leone in 2002, has made jurisprudential contributions to the development of the nascent and still unsettled field of international criminal law. A leading authority on the application of international criminal justice in Africa, Charles Jalloh argues that the SCSL, as an innovative hybrid international penal tribunal, made useful jurisprudential additions on key legal questions concerning greatest responsibility jurisdiction, the war crime of child recruitment, forced marriage as a crime against humanity, amnesty, immunity and the relationship between truth commissions and criminal courts. He demonstrates that some of the SCSL case law broke new ground, and in so doing, bequeathed a ‘legal legacy’ that remains vital to the ongoing global fight against impunity for atrocity crimes and to the continued development of modern international criminal law.

Please see the links below for the announcement of the symposium along with Professor Jalloh’s intro and the first two pieces by the former American Chief prosecutor Stephen Rapp.

SCSL Symposium: The Continued Relevance of the Contributions of the Sierra Leone Tribunal to International Criminal Law – Opinio Juris

SCSL Symposium: A Legal Legacy that Opens the Way to Justice in Challenging Places and Times-Part I – Opinio Juris

SCSL Symposium: A Legal Legacy that Opens the Way to Justice in Challenging Places and Times-Part II – Opinio Juris