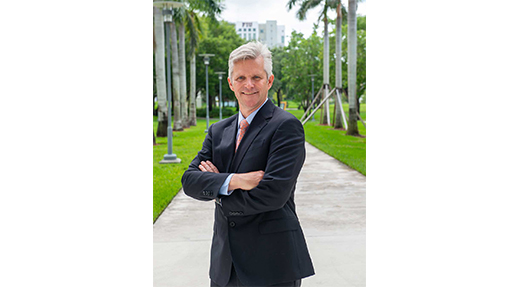 Antony Page, dean of the FIU College of Law, recently made a $200,000 planned gift to the university to establish a scholarship for law students who are among the first generation in their families to attend college.

“I was drawn to FIU because of its mission as a public school. It is a transformational place. The FIU College of Law is majority first-generation, majority-minority, and we’re a law school that successfully delivers an outstanding legal education,” Page said of his motivation to give.

Howard Lipman, CEO of the FIU Foundation, said Page’s gift “symbolizes his commitment to FIU and its students, both in and out of the classroom.

Page understands the positive impact scholarships can have on students’ success: During his own studies at Stanford Law School, he received a scholarship that he said helped propel his career in law.

“It gave me much more freedom in choosing a career path – without it, it would have taken me much longer before I could go into academia,” said Page, whose scholarly works have been published in high-impact journals such as the Michigan Law Review, Emory Law Journal, Stanford Social Innovation Review and Boston University Law Review, and have been cited by numerous courts, including the U.S. Supreme Court.

Page was named the third dean of the FIU College of Law in May 2018. An expert in corporate law, he teaches a wide range of courses including Contracts, Sales, Closely Held Business Organizations, Publicly Traded Corporations, Mergers & Acquisitions, International Law and International Securities Regulation. Prior to joining FIU Law, he served as vice dean and professor of law at the Indiana University Robert H. McKinney School of Law.

Page hopes that this scholarship, like the one he received as a student, will help students who want to pursue law realize their dreams and their potential, no matter their circumstances; and he hopes to inspire others to donate to FIU, as well.

“Our students are very worthy recipients. They show a lot of resilience, grit and grace under pressure,” Page said. “Many face very challenging environments. The fact that they are able to succeed given all of the challenges they face is incredible, impressive and inspirational. I hope that other people see that, too.”

FIU Law is among the most diverse law programs in the country. It is among the Top 50 public law schools ranked by U.S. News & World Report. The college also has one of the top employment rates in the state of Florida and regularly produces the highest bar passage rate in the state.

Page’s gift will support Next Horizon: The Campaign for FIU. He encourages those who may be interested in making a gift to FIU to explore student success initiatives such as the Law Path Program, which encourages traditionally underrepresented groups to join the law profession. Opportunities also exist to establish endowed chairs and professorships to support FIU Law faculty who are conducting groundbreaking research.

“Both are key aspects of our mission at FIU Law,” Page said.

View this story on FIU News.