Professor H.T. Smith honored by the University of Miami with the Harold Long Jr. and H.T. Smith Student Services Building 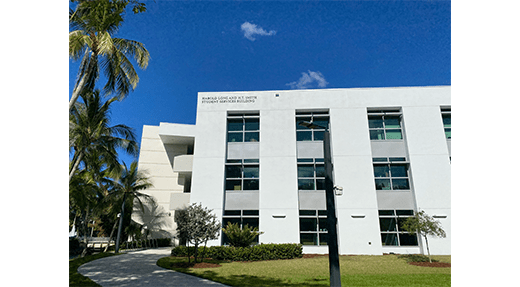 On March 4th, Professor H.T. Smith, founding Director of the FIU Law Trial Advocacy Program, was honored by the University of Miami with the unveiling of the Harold Long Jr. and H.T. Smith Student Services Building.  Located in the heart of campus, the building is the first in U.M.’s 97 year history to be named after African-Americans.

Professor Smith is a trailblazing trial lawyer and civil rights pioneer, devoted to demanding “a full cup of justice” for the least, the last, the lost, the looked over, and the left out.  He was Miami-Dade County’s first Black assistant public defender and first Black assistant county attorney.  A frequent lecturer on all things advocacy, he has been named one of America’s Top 10 Trial Lawyers by the National Law Journal, Top Trial Lawyer of the Year by the Dade County Bar Association, and is listed in The Best Lawyers in America.  He is most proud of leading a private effort to raise $5 million to build a Youth Center in Liberty City, and then donating the center to the Miami-Dade County Parks Department for the benefit of the underserved children in that community.