Back to Back Championships for Trial Team, as FIU Law Wins AAJ Regional. Moves on to Nationals.

Your FIU College of Law Trial Team is champion this semester once again – this time of the Southeast 1 Region at this year’s Student Trial Advocacy Competition (STAC), sponsored by the American Association for Justice (AAJ).

FIU bested No. 4 nationally-ranked University of South Carolina in the final.

This is the Trial Team’s second win in a row.  FIU won the Florida state championship – the Chester Bedell Memorial Mock Trial Competition, sponsored by the Trial Lawyers Section of The Florida Bar – just 8 weeks ago. 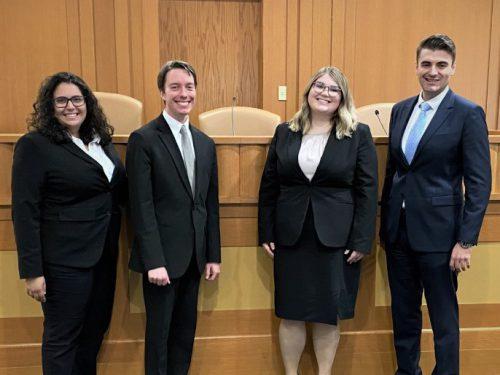 This year’s AAJ competition was virtual and comprised of eight national regions, with 128 teams competing in total, 16 teams in each region.

In our southeast region, FIU was power-ranked third after three preliminary rounds, and increased its power-rank to second going into the finals, where we proved victorious by a decisive 4-1 juror vote over South Carolina.

The top two teams from each region were crowned champion.

FIU Law Trial Team now goes on to AAJ nationals, where the winning teams from all eight regions across the country will vie for the title.

This year’s competition trial is a wrongful death case alleging negligence against a property management company after an elevated, residential wooden deck collapsed under the weight of some 50 hard-partying college seniors, killing one of them.

The AAJ team began preparing the day after the Bedell competition concluded in late January, working every day and evening — weekdays and weekends — to get ready for trial.  Scrimmages against Temple and American — champions of their own regions and also going to nationals — were invaluable.

“Going into AAJ, having just won Bedell, these students knew full well that no worthwhile accomplishment comes easily, and how difficult it was going to be to repeat as champions,” said Professor H. Scott Fingerhut, Assistant Director of the Trial Advocacy Program and the team’s lead coach.  “But together,” Professor Fingerhut continued, “these students held steadfast to a noble goal: that growing to our full potential meant embracing a challenge to draw out our deeper resources, talents and capacities — those we did not know we had — to surmount obstacles by summoning up our daring and creativity.  This kind of challenge, familiar to great athletes, scientists, and artists, to be sure, is not for the meek.  And now, having risen to this occasion and seizing this grand opportunity, these magnificent students of passion and principle may hold their heads high for having weathered a storm, proudly displaying our special FIU Law trial advocacy brand, and thriving, as Hemingway wrote, ‘stronger at the broken places.’”

AAJ STAC is one of the country’s two premier open mock trial tournaments.