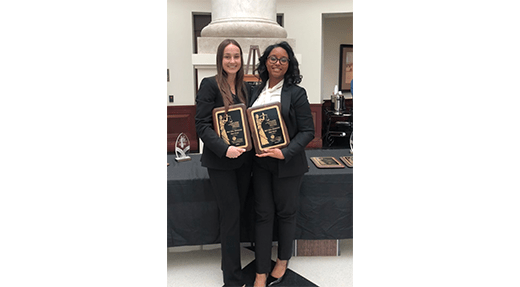 Samantha Lee and Kristy Michel represented FIU Law in the final round of the Competition against Baylor University in front of a panel of sitting First DCA judges in Tallahassee. The panel of the First DCA was comprised of the Honorable Judge Lewis, Jr., the Honorable Judge Bilbrey, and the Honorable Judge Tanenbaum. The winning team represented the appellant and argued that, under Florida’s worker’s compensation statutes, (1) a medical examiner’s testimony as to the place of contraction of COVID-19 was inadmissible; and (2) a paramedic’s death, caused by COVID-19, was not a compensable accident or injury. Ms. Lee and Ms. Michel worked tirelessly on their arguments for months and worked with the rest of the FIU Moot Court Team to perfect their oral advocacy. In the end, the DCA found the appellant’s argument persuasive and named FIU Law’s Moot Court Team as the champions of the Competition.

The Competition also awarded FIU Law Moot Court member Michelle Sola with the award for Best Oralist. The award is given to the competitor with the highest oral argument score during the three preliminary rounds of the Competition. Ms. Sola, along with her partner Samantha Forkel, advanced to the quarter finals of the Competition.

The FIU Moot Court Team is extremely proud of both teams and thanks everyone who helped both teams prepare for the Competition.