Rising 2L Daniel Elliot Gonzalez has co-authored Playing With Fire: The Strange Case of Marine Shale Processors published by Hamilton Books.  Upon its release, the book was ranked as the #1 New Release on Amazon for Environmental & Natural Resources Law.

Mr. Gonzalez was brought on to co-author alongside Dr. John Sutherlin at the University of Louisiana – Monroe, who was inspired to write this book following a trip to Marine Shale Processors in graduate school. 25 years later, Dr. Sutherlin and Daniel have uncovered the story behind what was once the largest hazardous waste incinerator in the world, the women-led environmental justice movement that spawned from the company’s pollution, and the events that led to Marine Shale’s eventual downfall.

Mr. Gonzalez graduated with a bachelor’s degree in political science in 2018 and a master’s degree in history in 2020 from the University of Louisiana – Monroe. At FIU Law, Mr. Gonzalez is the outreach coordinator for the Environmental Law Society. 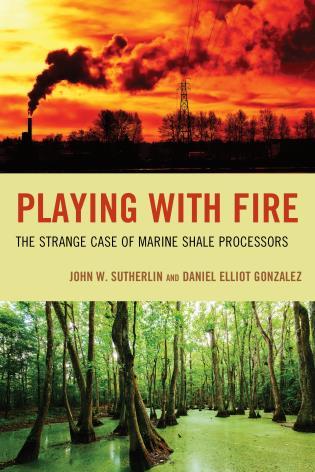 Summary: Playing with Fire chronicles the ongoing struggle facing Louisiana families trying to live and work against the backdrop of corrupt politicians and corporate greed. However, the story presented here is relevant wherever low-income, disenfranchised people are not included in decisions about their health and environment. This book examines the tale of Marine Shale Processors, the world’s largest hazardous waste company, and the women who fought to protect their community and their children. The lesson here is that a dedicated group of people fighting for what is right can win and it serves as an example for any community that wants to determine what their own environmental future. Playing with Fire is a well-documented account that provides lessons for communities, government agencies, and corporations. It dispels the narrative that low-income communities must settle for jobs at the expense of clean air and water, and demonstrates that corporations that further trample on the rights of people will ultimately pay the price.