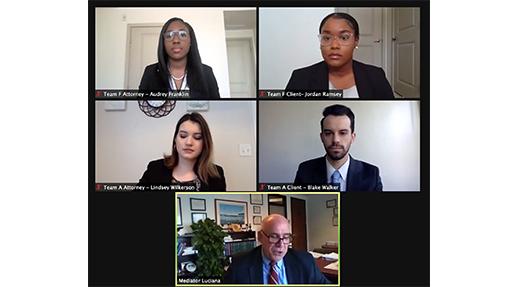 The FIU Law Negotiation and Mediation Team excelled at the national level and placed second in the nation at this year’s ABA Representation in Mediation Competition. The competition included 94 teams from 50 law schools and took place virtually from February 26 – April 10, 2021.

The ABA Mediation Team that participated in this year’s competition consisted of Christina Ramsey (3L) and Audrey Franklin (3L). The student coaches for this team were Liane Martinez (3L) and Lindsay Behnke (3L), who are also the Co-Presidents of the Negotiation & Mediation Team. Additionally, Ashira Vantrees (3L) played the role of opposing counsel for many practice rounds.

The ABA Mediation team advanced through the first two preliminary rounds against the University of Missouri (4th ranked Dispute Resolution Program in the country) and Fordham University to move into the Semi-Final Round ranked first of four teams.  Christina and Audrey defeated the University of Oklahoma in the Semi-Final round to earn a trip to the championship round to face Texas A&M (8th ranked Dispute Resolution Program in the country).  The final round was close, with a 2-1 decision for Texas A&M. This was the first trip to the ABA Mediation Competition Finals for the FIU Law Negotiation & Mediation Team, and its second place ranking is its highest ever in this Mediation Competition.