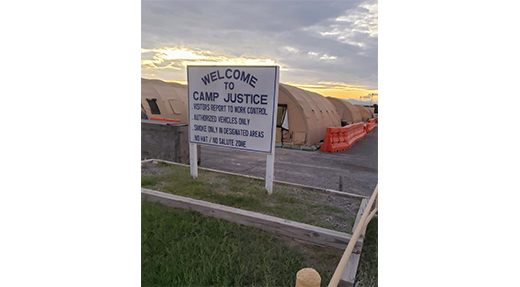 In early December of 2019, FIU Law student Ruben Alvarez was given the opportunity to visit Guantanamo Bay military base to observe and report on the military commission proceedings in the famous USS Cole case. Defendant and detainee Abd al-Rahim al-Nashiri is the alleged mastermind of the USS Cole bombing that resulted in the 17 deaths of US Navy sailors and was captured by the US government in 2002, where he was held in a secret CIA holding facility known as a “black site” for over 4 years.

Al-Nashiri’s case has faced numerous setbacks in its time, setbacks that underscoring the need for due process on both a practical and ideological level. The previous Judge on Al-Nashiri’s case, who presided over the case from 2015 until 2019 was dismissed and all his rulings vacated by the Court of Appeals by the District of Columbia because of a conflict of interest that the Judge did not disclose in order to hold onto his position and leverage it for a career opportunity with the Department of Justice.

Mr. Alvarez is the president of the Veterans and Military Affairs Law Student Association (VMALSA) at the College of Law. Professor Eric Carpenter is the faculty advisor for VMALSA, and as a member of the National Institute of Military Justice (NIMJ), is occasionally allowed to send FIU students to observe the commissions at Guantanamo Bay. Another student, Matthew Espino, will be attending a proceeding in January. Both are working on a publishing project for NIMJ.