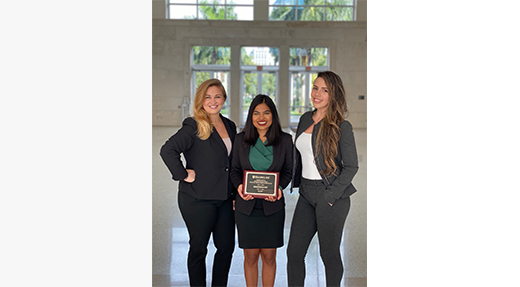 The FIU Law Board of Appellate Advocates extends congratulations to Kathleen Leon, Blairr Miller, Breana Khouly, Pooja Patel, Julie Talbot, and Dianet Torres for proudly representing FIU Law on the national stage this weekend at the Billings, Exum & Frye National Moot Court Competition.  Thank you for all of your hard work.

The Team traveled to Greensboro, North Carolina with Board of Appellate Advocate alumni Tina Childers as coach.  FIU Law had two teams amongst 42.  Other schools represented were Georgetown, Michigan State, William & Mary, Georgia, Georgia State, and Marquette to name a few.  Both FIU teams dominated the first two preliminary rounds, with an FIU Law orator earning the highest score each or their rounds.  At the end of the preliminaries, FIU Law had two teams in the octo-finals (meaning that both teams were in the top 16 out of 42 teams).

FIU continued to shine throughout the competition, receiving high praise from the attorneys judging each round. In the octo-finals, FIU Law’s team of Pooja Patel, Dianet Torres and Julie Talbot defeated George Mason University, and moved on to the quarterfinals where they beat the University of Oklahoma. In the semifinals the team lost, by a mere 1.16 points, to an outstanding team from Florida Coastal who ultimately became the tournament champions.

The Board of Appellate Advocates wishes to thank Professors Klion, Baker, Loeb and Mullins as well as FIU alumnus Sam Basch and Tina Childers for mooting the team members and/or providing additional resources to help the teams prepare for the competition!