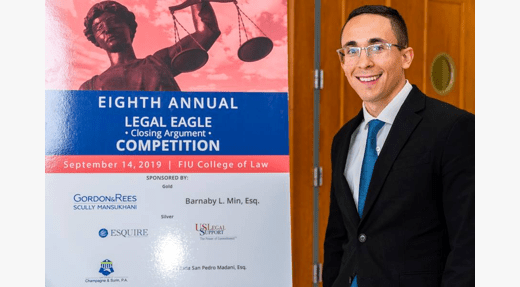 Justin, a Miami-Dade Assistant Public Defender and former Trial Team champion, battled through seven rounds – delivering winning closing arguments in the four preliminary rounds and single-elimination quarter-final and semi-final rounds – before being edged out in a thrilling final round to determine the champion.

This year’s Legal Eagle Competition presented a criminal prosecution of a father on trial for the murder of his daughter.  In order to enter the competition, attorneys must be members of The Florida Bar and practicing for less than seven years.  Each competitor was required to argue 10-minute closings for both sides of the case to panels comprised of local judges and experienced attorneys.  The fact pattern was released just three days before the tournament.

Along with Justin, two more College of Law Trial Team alumni answered the call to find out “Who is the Best Closer in South Florida?”  Also competing – and wonderfully representing the FIU Trial Advocacy Program — were COURTNEY SALAS (COL ’18), an associate in the Miami office of Cole, Scott & Kissane, and ANDREA PILOTO (COL ’18), a Miami-Dade Assistant State Attorney.

Courtney, a former Trial Team champion and competition Best Advocate herself, made it through to the Legal Eagle quarterfinals, before being bested by Justin on his way to the championship round.

Our former students were sponsored by Miami trial lawyer JOHN SELIGMAN of Friedman & Friedman, a generous supporter of the FIU Trial Advocacy Program.

“We could not be prouder of these three — for all the work they put in to prepare, and for the grit they showed all competition long,” said Professors H.T. Smith and H. Scott Fingerhut, Trial Ad Program Director and Assistant Director, respectively.  “In victory and defeat, Justin, Courtney, and Andrea displayed the type of passionate, principled advocacy that is our FIU brand and which distinguishes these special alumni as stellar trial lawyers of tomorrow.”