Our Professor Thomas E. Baker has published a new third edition of his popular book, Constitutional Analysis in a Nutshell (3d edition West Academic 2018). Professor Baker said, “I have published seventeen books but I think this is my favorite because it was so challenging to write about such a difficult and complex subject in a straightforward and understandable way. It was like I was being a teacher to my readers.”  According to Mac Soto, Senior Editor at West Academic, “This Nutshell is very popular and one of our top sellers because it is extremely accessible and comprehensive — this is a paperback course in American Constitutional Law.” The Professor celebrates his 40th anniversary as a law teacher this year, although he quipped, “I thought getting old would take much longer.” 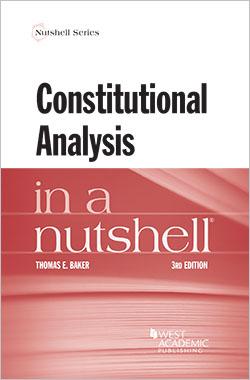