As part of Great Legal Storytellers 6, recent COL graduate Ashley Allison was awarded the Alex Alvarez Scholarship in Trial Advocacy. Ms. Allison is the second Trial Team member to receive this honor, which is bestowed upon a student who has made a significant impact in school and beyond through their contribution to the Trial Advocacy Program.

During her time at FIU, Ashley, a mother of two, was a member of the Trial Team and a steadfast volunteer for the Trial Ad Program at 1L orientation and all of its other events. Ashley was also a research assistant for Dean Acosta, Associate Dean Carbot, and Professor Travis. She served as Vice President, Pro Bono director, and a student-mentor with the Women’s Law Society. In addition, Ashley served as an ambassador for the Office of Admissions, traveling to California and Ohio representing FIU law at recruiting events. She was an active member of BLSA and FAWL, participated in the Death Penalty Clinic (writing memoranda on jury selection to be distributed to Florida capital defense counsel), and made Dean’s List nearly every semester.

When asked what has motivated her to pursue a career as a courtroom trial lawyer, Ashley replied, “I have always wanted to be a lawyer (I found a paper from 1st grade where I picked attorney as my career choice), but I decided to get my MBA before I came to law school just in case I didn’t like it. I knew I wanted to be a criminal defense attorney, specifically for indigent defense since I was little, because my great-great grandfather, who was an indentured servant in Virginia, was accused of shooting and killing my great-great grandmother as she was walking toward the house from the barn while holding my great-grandpa’s hand (he was only 4 at the time). My great-great grandfather never received a trial, and he died in prison some 15-20 years later. I grew up hearing that story, and it just made me very sensitive to the needs of the poor and how the criminal justice system (although I believe it is still the best in the world) still fails people daily. I want to be a part of that change. I believe that everyone, especially the poor, deserve not only equal but zealous representation!”

About Ashley, Professor H.T. Smith, Director of the Trial Advocacy Program, had this to say: “Ashley Allison personifies the mantra that ‘trial lawyers are trained to lead and called to serve.’ Her service to the Trial Team, the Trial Advocacy Program, and to FIU College of Law has been extraordinary. And I am confident that Ashley will continue to serve and to lead as she now proudly enters the legal profession.”

Ashley just sat for the Florida Bar exam and has begun her legal career as an Assistant Public Defender in Miami. 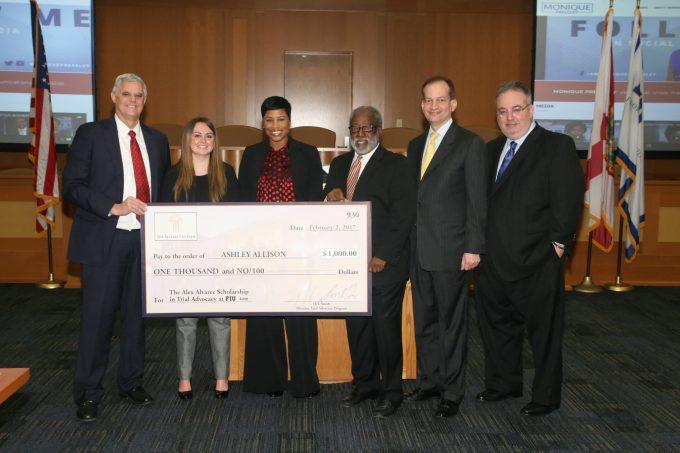