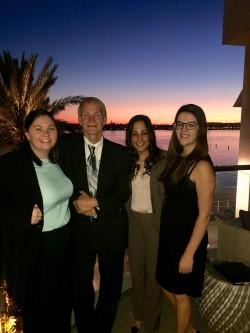 FIU Law congratulates Ms. Enbar Cohen (3L), who competed solo at the ABA National Negotiation Finals in San Diego on February 5-6, 2016.  Ms. Cohen advanced to the Semi-Final Round and finished 6th overall in the competition out of 190 teams nationwide.

Ms. Cohen explained, “competing against the top teams from across the nation was an exhilarating experience, even more so as a solo competitor. The countless hours and weekends spent practicing with Professor Walter, my coaches, and the entire FIU Law Negotiations team helped prepare me for the National Finals. I am extremely grateful for all of their help and guidance.”

After reflecting on her overall experience, Ms. Cohen shared, “the pressure was high, but I enjoyed every single moment of it. My only regret is not joining the negotiations team sooner.”

The National Finals featured the top 20 teams from 10 regions with over 190 teams from over 100 law schools competing at the regional level. This is the fourth consecutive year that the FIU Law Negotiation Team won the Southeast Championship, and it is the 8th time in the past 9 years that FIU Law sent a team to the National Finals.

Ms. Veiga shared, “Enbar had the unique opportunity to compete as an individual at Nationals, and I can think of no other person capable of succeeding in this arduous task. She is extremely intelligent, passionate, and charismatic. Kathleen and I are very proud of all the time she invested in this competition and her accomplishments.”

The entire FIU College of Law community wishes Ms. Cohen a much deserved congratulations on her negotiations success.