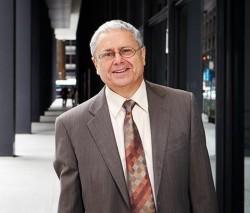 Getting by with a little help from his friends: Shylock’s Lawyers down through the centuries. A lecture by Richard H. Weisberg of Yeshiva University.

Richard H. Weisberg is the Walter Floersheimer Prof. of Constitutional Law at the Benjamin N. Cardozo School of Law at Yeshiva University.

While they may still be a minority, many well-known lawyers and judges have defended Shylock against that beleaguered character’s prosecutors. What are the legal and moral arguments mounted in favor of the Jew and against those Venetians who persecute and prosecute him? These remarks trace the long and distinguished history of “Shylock’s Lawyers.” In so doing, the lecture treats The Merchant Of Venice textually, emphasizing not only the contract formation scene (I. iii) and the trial scene (IV. i), but also the often disregarded “resolution” of this complex comedy in Act V.

Abroad, he has helped litigate successfully in American federal courts on behalf of Holocaust survivors and their heirs, providing a measure of justice for World War II victims of anti-Semitism. President Sarkozy of France awarded him the Legion of Honor in 2008. Weisberg is a pioneer in the growing Law and Literature movement worldwide, and his books The Failure of the Word, Poethics, and most recently In Praise of Intransigence, often treat the subject of Shakespeare and the Law. He serves currently on the Executive Committee of the MLA discussion group on Literature and the Law. He has taught that subject in graduate and undergraduate departments in the US, at law schools around the country, and in France, Denmark, Germany, Australia, and China. His stagings of legal dilemmas in great fictional works have won notice from the New York Times, the National Law Journal, and the New Yorker magazine. He has been a Guggenheim Fellow and recipient of Rockefeller Foundation (Bellagio Center), NEH, and ACLS grants.