During the weekend of November 7 – 8, FIU Law was host to the ABA Regional Negotiation Competition, which featured 24 teams from Florida, Georgia, North Carolina, and Texas.

And for the fourth year in a row, FIU Law took home the Regional title!

Advancing to Nationals are third-year law students Elroy John and Enbar Cohen who will compete in San Diego next February.

Finishing in the top 10, were the FIU Law Negotiation Teams of Christopher Pena (3L) and Nicole Peguero (2L), and Nicolas Castillo (2L) and Christine Trujillo (3L).

The competition simulates legal negotiations in which the law students, acting as lawyers, negotiate a series of legal problems. The problems consist of a common set of facts known by all participants and confidential information known only to the participants representing a particular side. 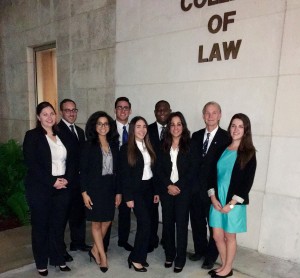