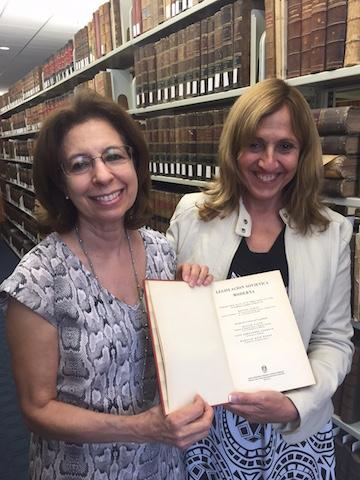 The FIU Law Library recently welcomed Dr. Maria Elena Cobas Cobiella – a visiting scholar from the University of Valencia. Cobas Cobiella is this year’s recipient of the FIU Díaz-Ayala Library Travel Grant. The Díaz-Ayala Library Travel Grants provides scholars and graduate students the opportunity to conduct research on Cuba and its diaspora, thereby expanding access to the library’s unique holdings and enhancing its value as a national resource. Cobas Cobiella is conducting research on Cuban law using FIU Law Library’s Mario Diaz Cruz Library. This remarkable collection of Cuban legal documents, manuscripts and pamphlets is supporting her research by exposing the changes that took place during the 1960s revolutionary period in Cuba.

The main objective of Cobas Cobiella’s investigation is to prepare a research guide of Cuban law which will assist scholars in researching the Cuban legal system and its laws from a historical perspective. Already, Cobas Cobiella has discovered that the Mario Diaz Cruz Library includes original versions of laws enacted at the time of the revolution in 1960s. These laws stopped the rule of law in place prior to the revolution, and introduced the new legal system post-revolution, by introducing the influence of the Soviet Union legal system. The pamphlet and texts contained in the Mario Diaz Cruz Library are original official publications which address an assortment of transitional legal issues such as confiscation, immigration, passports, authorizations to leave, interruption of habeas corpus and suspension of private universities. All aspects of the legal system that was in place for half a century in Cuba was ended as a result.

Cobas Cobiella is studying these manuscripts and legal works to link the past to the present in hopes of foreseeing what the future holds for the Cuban legal system.